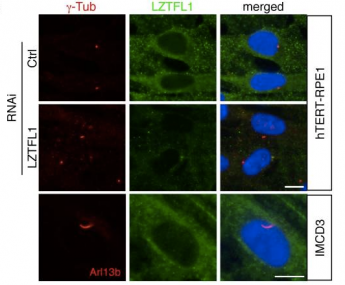 The mechanisms controlling BBSome trafficking and the cargo proteins transported by the BBSome are not well understood. We hypothesized that by utilizing tandem affinity purification (TAP) we could identify novel regulators and cargos of the BBSome. Therefore, we generated transgenic mice expressing BBSome subunits with a TAP tag and performed tandem affinity purification using tissue from these mice to identify a novel protein, leucine-zipper transcription factor-like 1 (LZTFL1), as a BBSome interacting protein. We determined that LZTLF1 is a negative regulator of BBSome ciliary trafficking. We also show that all BBSome subunits and BBS3 (ARL6) are required for BBSome ciliary entry and that reduction of LZTFL1 restores BBSome trafficking to cilia in BBS3 and BBS5 depleted cells. Furthermore, we showed that the BBSome and LZTFL1 regulate ciliary trafficking of Smoothened (SMO), a 7-transmembrane Hedgehog signal transducer. Our findings identify an important player in cilia biology and provide novel insight into the regulation of Sonic Hedgehog (Shh) signaling, a crucial signaling pathway for organizing the body plan, organogenesis and tumorigenesis. In subsequent work that builds upon the finding that the BBSome and LZTFL1 play a role in Shh signaling, we pursued the question of why BBS mice do not develop polydactyly. We confirmed that the loss of BBS genes in mice results in accumulation of Smoothened and Patched 1 in cilia resulting in a decreased Shh response, however the reduced Shh signaling was not sufficient to result in polydactyly. Furthermore, we showed that knockout of Bbs7 combined with a hypomorphic Ift88 allele results in embryonic lethality with e12.5 embryos having exencephaly, pericardial edema, cleft palate and abnormal limb development, phenotypes not observed in Bbs7-/- mice. These results indicate that BBS genes modulate Shh pathway activity and interact genetically with the intraflagellar transport (IFT) pathway to play a role in mammalian development.