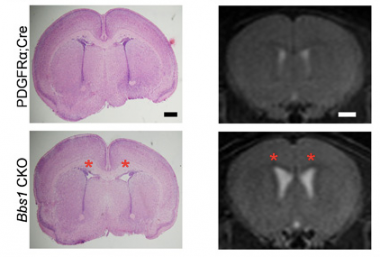 Hydrocephalus is a common neurological disorder leading to expansion of the cerebral ventricles. Most neonatal cases are of unknown etiology and are likely to display complex inheritance involving multiple genes and environmental factors. We employed a hydrocephalic mouse model of the human ciliopathy Bardet-Biedl Syndrome (BBS) and identified a role for neural progenitors in the pathogenesis of neonatal hydrocephalus. We found that hydrocephalus in this mouse model is caused by aberrant PDGFRα signaling, resulting in increased apoptosis and impaired proliferation of NG2+PDGFRα+ neural progenitor cells. Targeting this pathway with lithium treatment rescued NG2+PDGFRα+ progenitor cell proliferation in BBS mutant mice, reducing the abnormal ventricular volume. Our findings demonstrate that neural progenitors are critical in the pathogenesis of neonatal hydrocephalus and we identified a novel therapeutic target for this common neurological disorder. In subsequent work as an offshoot of the above findings, we investigated a role for Wnt signaling in hydrocephalus. Wnt signaling is involved in regulating embryogenesis, cell proliferation and differentiation, and has stage and context specific effects. Wnt signaling can be divided into canonical (Wnt/-catenin) and non-canonical (Wnt/PCP, Wnt/Ca++) pathways. Activation of the non-canonical Wnt pathway can down regulate the canonical Wnt pathway and vice versa. Loss of function of Wnt/PCP pathway components, Celsr1 and Celsr2, have been shown to develop neonatal hydrocephalus. Prickle2 is a core component of non-canonical Wnt/PCP pathway. Although Prickle2 knockout mice do not develop hydrocephalus, we showed that loss of Prickle2 rescues the hydrocephalus phenotype of Bbs7 knockout mice, suggesting that the Wnt pathway plays an important role in the pathogenesis of hydrocephalus.

In future work, we will Investigate the potential for modifying the hydrocephalic phenotype in ciliopathy mouse models utilizing pharmaceuticals and genetic methods to manipulate specific signaling pathways including the PDGFRα, Wnt, Shh, and Notch pathways, selected based on preliminary data.