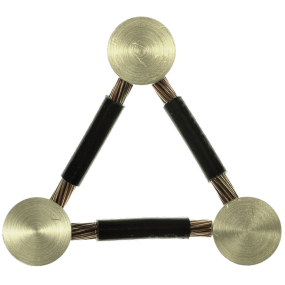 In previous work, we identified a stable complex (BBSome) consisting of eight proteins that binds PCM-1 and tubulin. Our data indicate that the BBSome performs an essential ciliogenic function at the basal body and inside the cilium. The cilia-related function of the BBSome is mediated, at least in part, through the Rab8 GDP/GTP exchange factor (Rabin8). The relationship between the BBSome and other BBS proteins was unknown. In the work reported in this manuscript, we used tandem affinity purification to isolate a novel complex composed of three chaperonin-like BBS proteins (BBS6, BBS10, and BBS12) and CCT/TRiC family chaperonins, and demonstrate that this BBS chaperone complex mediates BBSome assembly. Chaperonin-like BBS proteins interact with a subset of BBSome subunits and promote their association with CCT chaperonins. We show that CCT activity is essential for BBSome assembly and that knockdown of CCT chaperonins in zebrafish results in BBS phenotypes. Our data demonstrate that BBS6, BBS10, and BBS12 are necessary for BBSome assembly and that impaired BBSome assembly results in BBS phenotypes. Together this work explains the involvement of 10 BBS genes in the genetic heterogeneity of this disorder. In subsequent work, we identified BBSome assembly intermediates and show that the BBS-chaperonin complex plays a role in BBS7 stability. BBS7 interacts with BBS2 and becomes part of a BBS7/BBS2/BBS9 assembly intermediate referred to as the BBSome-core complex. By characterizing intermediates, we demonstrate that BBSome assembly is an ordered process involving the chaperonin BBS complex and intrinsic protein-protein interactions. The identification of BBSome intermediates has the potential to aid in explaining clinical heterogeneity observed among BBS patients. In ongoing and future work, we are investigating the relationship between BBSome function and tissue-specific signaling, as well as continuing to use protein interaction methods to identify novel complexes that play a role in cilia function.