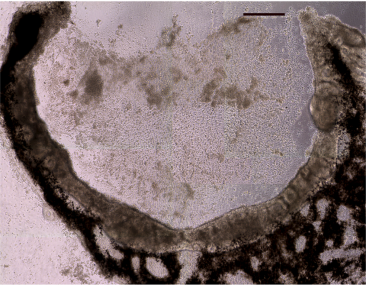 In this study, state of the art sequencing technologies were used to identify disease-causing mutations in the USH2A gene in an adult patient with autosomal recessive Retinitis Pigmentosa. Induced pluripotent stem cells (iPSCs), generated from the patient's skin, were differentiated into multi-layer eyecup-like structures with features of human retinal cells. The inner layer of the eyecups contained immature photoreceptor cells that expressed photoreceptor markers and exhibited cilia and basal bodies characteristic of outer segments. Analysis of the USH2A transcripts of these cells revealed that one of the patient's mutations causes a large piece of intron 40 to get transcribed into RNA, which induces a translation frameshift and a premature stop codon. Western blotting revealed an upregulation of proteins (GRP78 and GRP94) associated with mutation induced stress of the endoplasmic reticulum. This suggested that the patient's other USH2A variant (Arg4192His) causes disease through protein misfolding. Transplantation into 4-day-old immunodeficient retinal degenerative mice resulted in the formation of morphologically and immunohistochemically recognizable photoreceptor cells suggesting that the mutations in this patient act via post-developmental photoreceptor degeneration/death.

This work is in press with eLife.