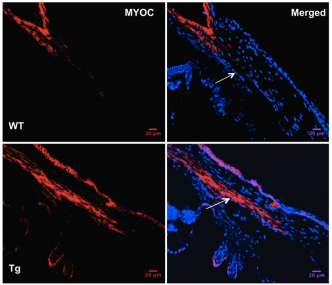 Mutations in myocilin (MYOC) are the most common genetic cause of primary open angle glaucoma (POAG), but the mechanisms underlying MYOC-associated glaucoma are not fully understood. Efforts to develop an animal model of POAG were not successful until we developed a transgenic mouse model (Tg-MYOCY437H) by inserting a human mutation into the mouse gene and expressed the mutant mouse gene in relevant eye tissues. Analysis of 3 month old Tg-MYOCY437H mice revealed that they display glaucoma phenotypes (i.e., elevated intraocular pressure [IOP], retinal ganglion cell death, and axonal degeneration) closely resembling those seen in POAG patients. This model has been key to identifying novel mechanisms involved in glaucoma. We showed that mutant myocilin was not secreted into the aqueous humor but accumulated in the ER of the trabecular meshwork (TM), thereby inducing ER stress in the TM of Tg-MYOCY437H mice. Furthermore, chronic and persistent ER stress was found to be associated with TM cell death and elevation of IOP in Tg-MYOCY437H mice. Of note, we showed that reduction of ER stress with a chemical chaperone, phenylbutyric acid (PBA), prevents glaucoma phenotypes in Tg-MYOCY437H mice by promoting the secretion of mutant myocilin in the aqueous humor and by decreasing intracellular accumulation of myocilin in the ER, thus preventing TM cell death. These results demonstrate that ER stress is linked to the pathogenesis of POAG. In subsequent work, we have utilized ocular administration of PBA to treat POAG in mice opening up the possibility of a novel treatment for human POAG. The identification of novel pathways involved in POAG, as well as the development of an animal model for this disorder make it possible to explore genetic modifiers of glaucoma in future work. In addition, we are extending this knowledge of the mechanisms involved in MYOC-associated POAG to other forms of POAG.