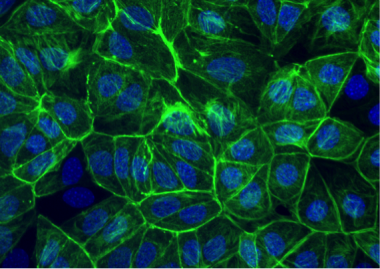 The Age-Related Eye Disease Study (AREDS) combination of vitamins and zinc is commonly recommended to patients with age-related macular degeneration (AMD), but the mechanism whereby this regimen affects the progression of AMD has not been well studied. Wynn Institute scientists examined the effects of an AREDS vitamin solution on cells involved in AMD and found that treatment with vitamin solution reduces the adhesion between white blood cells and the endothelial cells that line blood vessels (see photo below), suggesting that inflammation in eyes with AMD may be reduced by the treatment. Results were confirmed in cultures of human donor eyes, which revealed that treatment with AREDS vitamins reduces the expression of inflammatory proteins. These findings are notable since previous studies by us and others show increased trafficking of white blood cells into eyes during the course of AMD. This work was published in April 2012 in Invest. Ophthalmol. Vis. Sci. 53:1041-7.