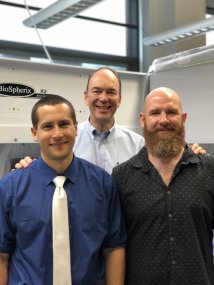 IVR researchers recently published an article presenting the development and evaluation of a gene therapy vector for RPGR, the 3rd most common cause of all inherited retinal disease. This gene is a challenging therapeutic target, because gene therapy vectors containing wild-type RPGR sequence, which includes the highly repetitive low complexity region ORF15, are extremely unstable. They exhibit accumulations of genomic changes during the process of propagating the viral plasmid.

To develop a stable RPGR gene transfer vector, we altered the DNA sequence of the ORF15 region with synonymous substitutions (i.e. those that do not affect the resulting protein sequence). These changes were designed to reduce the repetitiveness and increase the stability of the DNA sequence. The modified RPGR construct was then packaged into an adenovirus (AAV serotype 5) and the ability to produce appropriate RNA and protein was demonstrated. The resulting gene therapy vector with the modified ORF15 region was used to make a clinical grade gene transfer vector (IA-RPGR).

We demonstrated that the modified transcript was expressed at levels similar to wild-type constructs, after the IA-RPGR gene therapy vector was delivered with subretinal injections in rat. In vitro pull-down assays were used to verify that IA-RPGR protein product retained normal protein binding function. This exciting research program has generated a stable RPGR gene transfer vector capable of producing RPGR protein, which is the necessary first step in progressing to an IND application with the FDA and eventual clinical trials.

The results of this experiment have been published in Human Gene Therapy.