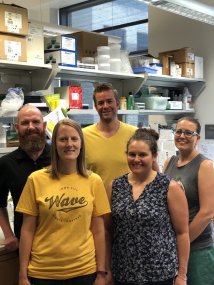 A team of IVR researchers published their successful correction of disease-causing mutations in patient-derived induced pluripotent stem cells (iPSCs). Enhanced S-cone syndrome (ESCS) is caused by recessive mutations in the photoreceptor cell transcription factor NR2E3. The loss of functional NR2E3 results in reduced populations of rod photoreceptors, due to a large increase in the population of photoreceptors tuned to identify short-wavelength (blue) light.

In this study, a CRISPR-based homology-directed repair strategy was developed, and used to correct two different disease-causing NR2E3 mutations in iPSCs generated from two affected individuals. This is important as autologous cells (i.e. those derived from the patient themselves) are ideal to minimize risks due to immune response. One patient's iPSCs were differentiated into retinal cells, from which NR2E3 transcription was evaluated in CRISPR corrected and uncorrected clones. The uncorrected clones contained the patient's c.119-2A>C mutation in NR2E3, which causes the inclusion of a portion of intron 1, the creation of a frame shift, and generation of a premature stop codon. The corrected clones repaired this mutation resulting in the normal NR2E3 transcript. In summary, we used a single set of CRISPR reagents to correct different mutations in iPSCs generated from two individuals with ESCS. In doing so we demonstrate the advantage of using retinal cells derived from affected patients over artificial in vitro model systems when attempting to demonstrate pathophysiologic mechanisms of specific mutations.

The results of this research project have been published in the journal Genes.